The Beech Family and Beech Close

We were very pleased recently to receive an email from Alana Parker who is the great grand-daughter of Edgar Beech.   Alana explained a little of her family history and how it connects to Beech Close on Little Lane.

Alana’s grandmother is Doris Parker (nee Beech).  She was born in 1926 in a house that stood next to The Reading Room at the bottom of Cross Hill.   Doris’ father was Edgar Beech, her grandfather was William Beech.  William owned Orchard House Farm on Little Lane and when he passed away left the farm to his son Edgar.

Alana mentions that she noticed in another document that it is incorrectly stated that Beech Close was named after Arthur Beech.  In fact, Arthur was sadly killed during the Great War, but his brother, Edgar (Doris’ father), survived and returned home to continue farming.  Edgar and Arthur were two of four sons, and two of eight children born to William and Emily Beech.

Doris’ youngest brother Anthony Edgar Beech, the youngest of seven children, inherited Orchard House Farm.   Anthony was executor of the estate and when he sold the property had the Close named after their dad, Edgar.  Beech Close is therefore named after Edgar Beech.

Extracts from Alana’s email sent on behalf of her grandmother, Doris.  (These extracts have been reproduced with her permission).

“Doris Parker was born in Gringley in 1926 and lived there until 1962. Her maiden name was Beech.  She would like me to tell you she was born in the house next door to The Reading Room, at the bottom of Cross Hill. My father was born at 14 Laycock Avenue in 1960”.

“We have just spent hours on your site looking at the photographs in which my grandmother recounted all she knew of everyone she saw. Including whose door latches her and her friends tied together before knocking and running. FYI the now demolished cottages near Beacon Hill were the target”.

We asked if Doris lived at Lyndale on Cross Hill.  “In regards to Lyndale, no she did not live there. She lived in a three-bedroom, 2 story cottage, that backed onto the Reading Room property. The front of the cottage faced into the yard behind Lyndale. It was condemned in ‘40-‘41. She lived there when the village was bombed in WWII. 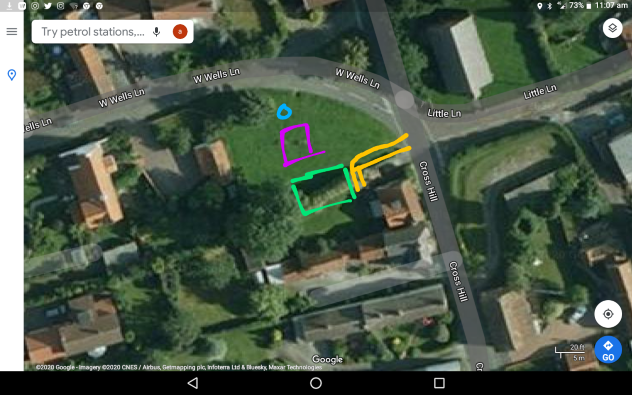 As Doris Parker remembers the layout.   The path is yellow, the Reading Room is purple, the well is blue, Doris’ family cottage is green.

There was a pump in the centre of the yard which was the only pump in Gringley that didn't dry in Summer. She remembers a Miss Taylor living in Lyndale in ‘39 when she used to deliver milk for her family. She also remembers a Clark family living in the big house next door until Bob Perry bought it in the late 50s early 60s”.

Doris helped with some queries about the old School Room/Reading Room which stood on the raised land next to Lyndale. 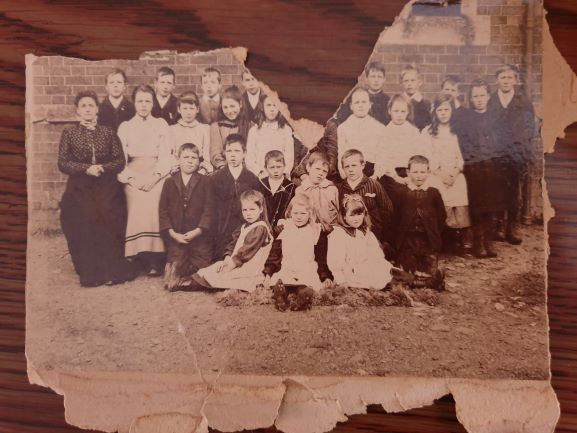 C1900.  Edgar Beech second from the left, back row 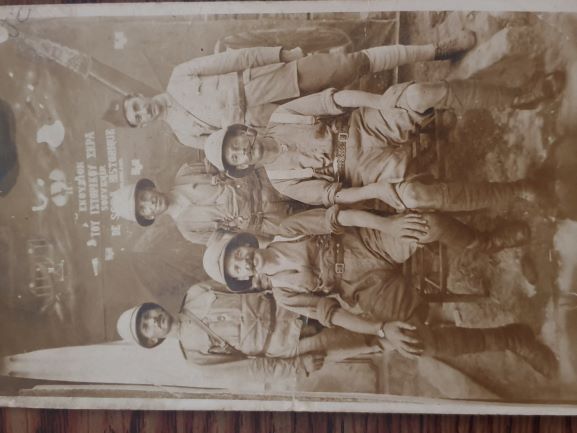 Edgar Beech served as a Lewis Gunner in Salonika during WW1.  Standing centre in the back row. 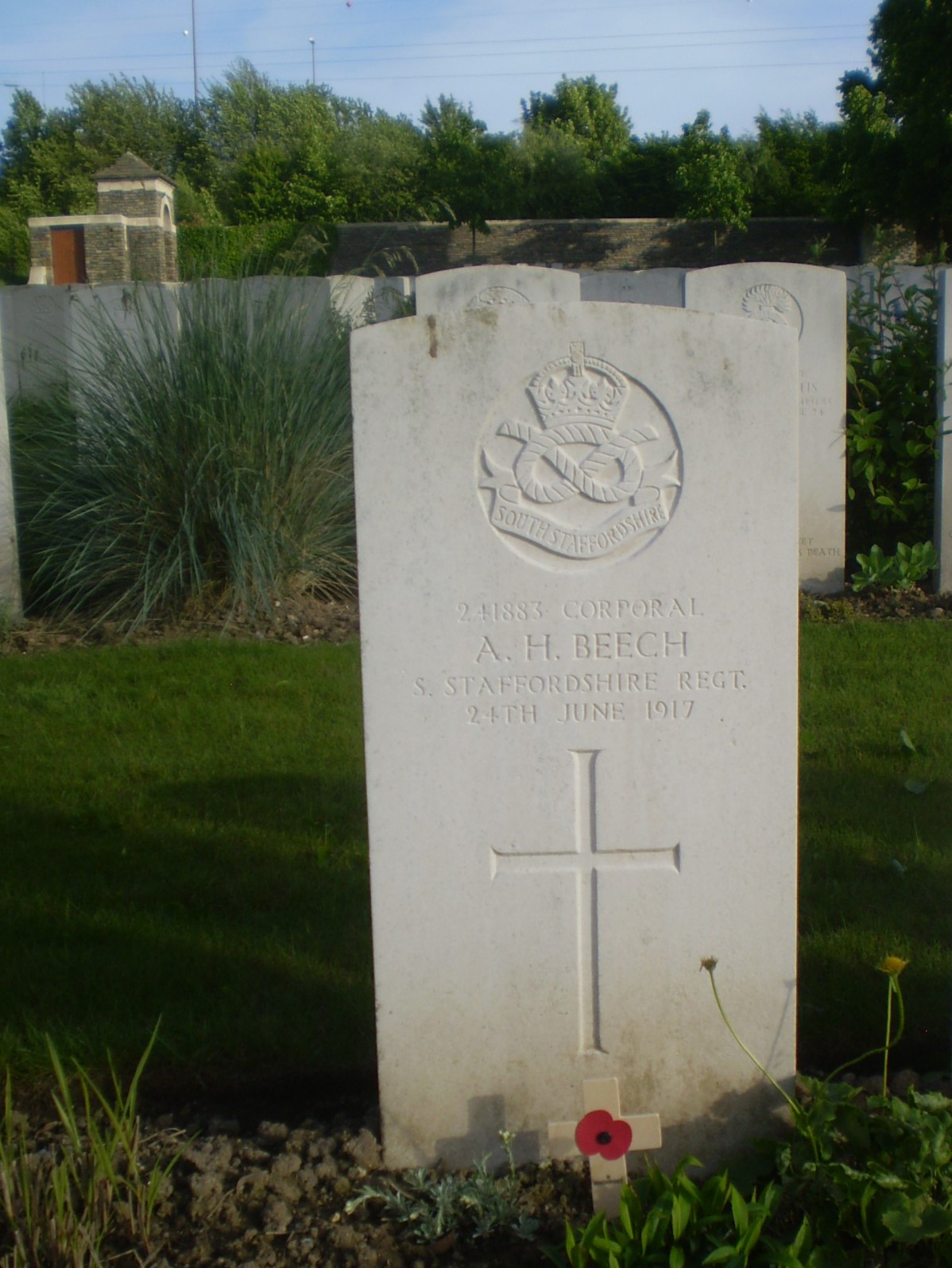 Arthur was a Corporal in the S. Staffordshire Regt and sadly died in 1917.  He is buried in Loos British Cemetery.
Mike Garrett, the History Club Chairman, has visited the grave as part of research for the History Club publication 'Tribute to the 24'.
The book remembers the men of Gringley who lost their lives in the Great War. 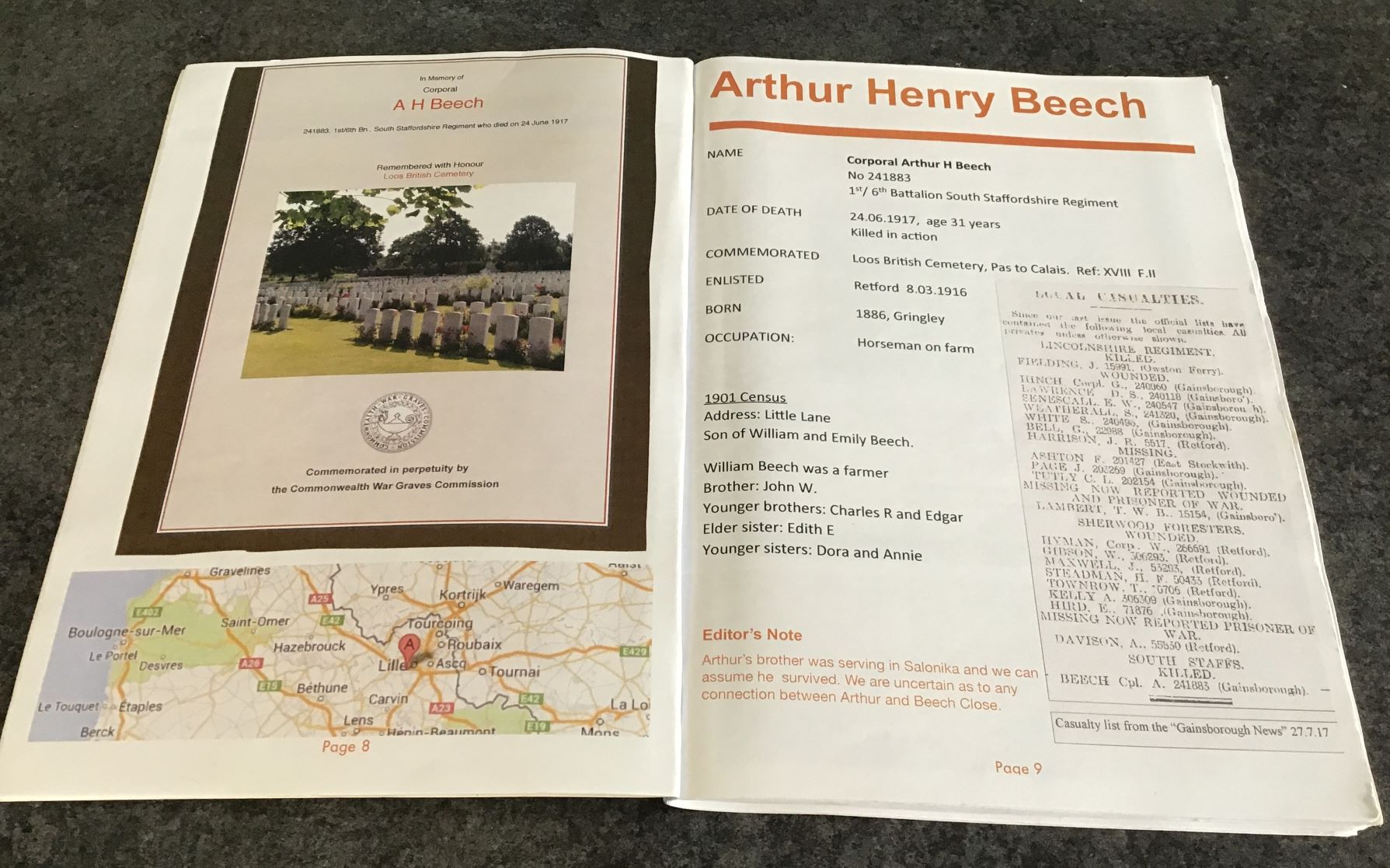 Extract from 'Tribute to the 24', this book was published in 2014 and some copies are still available.

The Marriage of Annie Beech (daughter of Edgar and Lavinia Beech) to Walter Wright, 1918 either Easter or Whitsunday

Thanks to Alana and Doris Parker we have been able to add to the story of the Beech family.